SkyDrive Inc., a world-leading developer of urban air mobility solutions, is proud to announce that it conducted a public demonstration flight of its new SD-03 flying car model on August 25, 2020. It was the first public demonstration of a flying car in Japan. The flight took place at the 10,000-square-meter (approximately 2.5-acre) Toyota Test Field, which is one of the largest test fields in Japan and home to the company’s development base.

The single-seat SD-03 took off in the early evening and circled the field for about four minutes. A pilot was at the controls but a computer-assisted control system helped ensure flight stability and safety while technical staff at the field monitored flight conditions and aircraft performance at all times as backup.

The aircraft has been designed to be the world’s smallest electric Vertical Take-Off and Landing (eVTOL) model as a new means of transportation for the near future. It measures a compact two meters high by four meters wide and four meters long and requires only as much space on the ground as two parked cars. The powertrain consists of electric motors that drive rotors deployed in four locations, with each location housing two rotors that individually rotate in opposite directions, each driven by its own motor. The use of eight motors is a means of ensuring safety in emergency situations during flight and as such aims to address compliance standards and allay potential regulatory concerns.

The key word guiding the aircraft’s design was “progressive,” as befits a new mode of transportation. Viewed from the side, the fuselage has a lean, sleek look with the rotor housings extending out in swooping curves that maintain the visual unity of the aircraft’s design and emphasize its aerodynamic qualities. With the striking SkyDrive emblem fitted on the front, the SD-03’s visual design expresses the dynamism of a pair of propellers rising up into the sky of the future, working in tandem. The aircraft has two white lights in front and a red light running around the bottom of the body and these are a characteristic unique to flying cars, designed to make it easy for observers to tell which way the vehicle is headed when it is floating in the sky.

SkyDrive’s flying car has been designed to be a coupe embodying dreams and exuding charisma, such that it will be welcomed into people’s lives and used naturally. The main exterior color of the SD-03 is pearl white, which was chosen to represent white birds and the floating clouds in the sky of users’ future. The company hopes that its aircraft will become people’s partner in the sky rather than merely a commodity and it will continue working to design a safe sky for the future as a partner in the sky.

SkyDrive will continue to conduct test flights under an expanding range of conditions in order to improve its technologies further and achieve full compliance with the safety provisions of the Civil Aeronautics Act. To this end, based on the results of SD-03 testing, it aims to obtain approval for flights outside the limits of the Toyota Test Field before the end of 2020.

We are extremely excited to have achieved Japan’s first-ever manned flight of a flying car in the two years since we founded SkyDrive in 2018 with the goal of commercializing such aircraft. We aim to take our social experiment to the next level in 2023 and to that end we will be accelerating our technological development and our business development. We want to realize a society where flying cars are an accessible and convenient means of transportation in the skies and people are able to experience a safe, secure, and comfortable new way of life. We also aspire to develop markets around the world, in collaboration with our partner companies, so that an urban air mobility society with aircraft supplied by SkyDrive becomes a reality not only in Japan but also across the globe.

The manned flight we have achieved this time is the culmination of SkyDrive’s achievements for technical verification. We have been working on the design of electric propulsion systems, flight control systems, aircraft structures, testing, manufacturing, and introducing monitoring equipment for aircraft conditions during flight testing step by step, and with a considerable sense of speed. We will continue to develop technologies and acquire type certification so that safe and secure flying car operation services can be launched in fiscal 2023.

In designing an unexplored, new genre of transportation known as the flying car, we chose the keyword “progressive” for inspiration. We wanted this vehicle to be futuristic, charismatic and desirable for all future customers, while fully incorporating the high technology of SkyDrive. We believe that this vehicle will play an active role as your travel companion, a compact coupe flying in the sky. As a pioneer of a new genre, we would like to continue designing the vehicles that everyone dreams of. 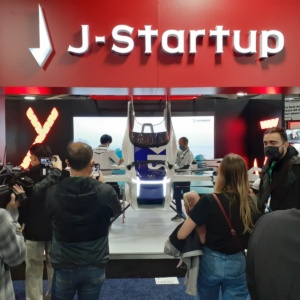 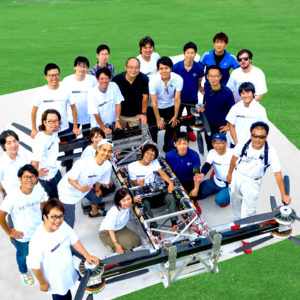 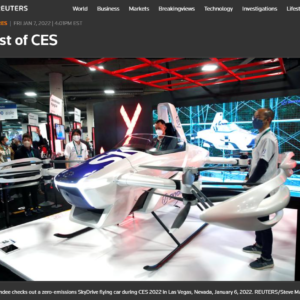 SkyDrive Listed in “Best of CES” by Reuters. 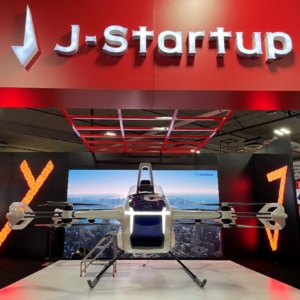